This is something that I have wanted to do for years. I want to in my spare time, attempt to learn and play guitar. Inspired somewhat by my years of playing Rock Band and Guitar Hero. I know this will be a challenge, and I have no aspirations beyond playing a few songs well enough. The Guitar I picked up is a Fender Squire, modified with a MIDI compatible fret board. This model is designed to be used in the Pro mode of Rock Band. I know, a game is not the best tool, but from the reviews I have read, this may be possible to pull off. 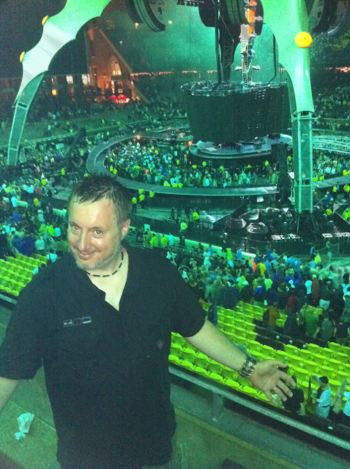 More than a year back Karen bought us tickets to the outdoor U2 concert. Well, the concert was delayed by a year due to issues with Bono's health. Fast forward today, Bono is back and, man is he rocking. I am beyond impressed. U2 really knows how to put on a good show! It started pouring rain about an hour into the show. We were soaked to the bone, but that did not deter us or members of U2. Bono even did a rendition of "Singing in the Rain" while sporting an umbrella. Amazing!

I was not planning on attending E3 two years in a row. I had waited 30+ years for my first visit, so I had no aspirations of a second one so soon. CodeWeavers sponsored my trip this year fully. Thanks! The highlight of this years E3 was the WiiU. It looks interesting enough, imagine a dual stick joystick, with a 7" touch screen in the middle of it. Should add some wild gameplay possibilities. The console itself looks to be about the same specs as a Xbox 360. So again, Nintendo plans to not push the bleeding edge of graphics. It has served them well for the Wii, I'm not convinced they can repeat their success.

After 4 months of solid work, and more than a year of planning, our home remodel is complete. Well actually it was completed 2 months ago. Today marked the completion of the last major construction step, the 2nd floor rear deck. I really love being home again. We had to stay at my brother-in-laws house during the heavy part of the construction from August, until end of December. During that time Reed was born. So, needless to stay, it was an interesting time, all of us being crowded into his home. Thanks E, we really appreciate it!

Reed, we built this house for you little dude. I'm sure you'll love it. You will have something I didn't have, a consistent house for hopefully your entire childhood.

Today the UPS dude dropped off my Open Pandora. This slick little device, is bascially a Linux based open source handled classing gaming dream. I mostly want it for the emulation possibilities. I plan on running classing NES, SNES, and even Playstation 1 games. 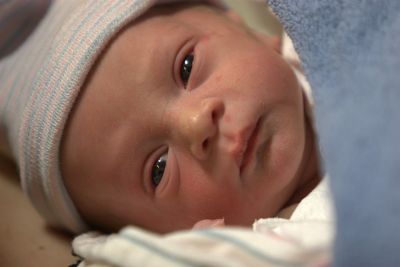 Today my lovely wife Karen gave birth to our son Reed. He is 5lbs and very healthy. Welcome to the world Reed! I look forward to showing showing you many geeky things.

For our vacation this year, Karen and I decided to spend a week in Hollywood, California.This is my first trip to the Los Angeles area. I'd been to California before, but never L.A. The first part of the trip was your typical touristy stuff. We drove ourselves around the area in a 2010 Ford Mustang convertible with the top down. As a Minnesotan, I am envious of the weather they have out there. One of my favorites moments is when we waked from Santa Monica pier to Venice Beach and back. I was amazed how much Venice Beach smelled like incense */wink*. Another day was spent at Universal Studios Hollywood.

The last few days of the trip I attended E3, which is also know as the Electronic Entertainment Expo. E3 is sort of Mecca for gaming geeks. It is basically where the big gaming companies show off what is coming our for the next holiday season. Yes, the conference is loud, crowded, with long waits. All of that aside, it was well worth it! I look forward to going again.

I have just arrived home from another outstanding European WineConf trip. Each year CodeWeavers sponsors a conference for the open source Wine developers conference. We move the location each time. Every 3rd year or so, we host it in Minnesota. This year, WineConf was held in Enschede, The Netherlands.This is my second trip to The Netherlands, also known to us yanks as Holland.

I have to say, the Wine geeks really know how to drink. The funny part is, most of us drink beer, and not much wine.

Rocktober is the month of living hard and getting your ass in gear before the harsh reality of Minnesota winter is upon us. I celebrated Rocktober by doing the following things:

After 4 years, it was time to finally give Sonic (my home Router/Firewall/Web,File Server) a full upgrade. It had been running quite well on a Dual P3 Slot 1 mobo. But, the 120 gigabyte hard drive was woefully inadequate. If I was going to do a upgrade, I wanted something low power, and more importantly, quiet. After a bit of research at Newegg.com, I found exactly what I was looking for. An Asus Intel Atom 330 with the ION chipset. This is the same CPU they have been using in most Netbooks. The specs read as dual core 1.6 GHz and 64bit capable. Perfect! The motherboard does have more features than I need in a Server, I disabled the Bluetooth receiver for example. The hard drive was upgraded to a Western Digital Caviar Green 1 Terabyte drive. Plenty of space for my needs, and low power to boot. Since this was a completely new system, I went the new full Debian install route, instead of just coping the old hard drive over. This will have removed any old cruft that build up over the years of Linux upgrades. So far it is purring like a kitten, a very very quiet kitten.

Game On! Rocktober marks the beginning of the flood of new games hitting shelves in preparation for the holidays. For me, the big games this month were Uncharted 2: Among Thieves and Brutal Legend. I already beat Uncharted 2 in less than a week. It still took me about 10 hours to play the main story of the game. I just could not put it down. It was that awsome of a game. 5 Stars for sure! I still have yet to play Brutal Legend, but it does look like it could Rock! (Yes, I know I stole or "borrowed" Rocktober from the Brutal Legend advertising campaign.)

Best of all, Rocktober is far from over, how are you rocking it? Next up... FESTIVUS!

Speaking of hard MN winters, this October has been unseasonably cold. We already had freezing nights, and at one point 2 inches of Snow. The normal for this time of year is 50's. Gotta love Minnesota! You just never know what kind of weather you will get here.

I took a PTO day today to work on my mental health. That, and I needed to spend some time putzing with my home puters. I have not performed any significant upgrades to Moonshine for quite some time now. In the last few months Moony has become somewhat cranky. Team Fortress 2 would reboot during game load, and other games would simply hang afer 10 minutes. Since I feel it is still not in my best interest to spend the buckazoids on a full system upgrade, I went the el-cheap-o route and simply upgraded the part most likely causing my headaches. The Video card.

After upgrading, here are the latest benchmarks, with comparisons to the last 2 generations.

I still have no ETA on when the next FULL upgrade of Moonshine will happen. My current rough plan is to wait until Windows 7 ships this fall, then look at prices. It also depends on when a PC game ships that really needs more power than I have.
Please Wait...
eyJ0enMiOi01LCJjZG4iOjAsImNkbnRzIjoxNTczMzE3Mjc4fQ==