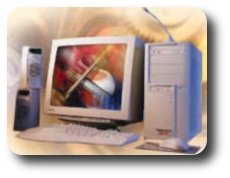 Moonshine "Zero". The father of the current Moonshine. This was my first truly custom built system from the ground up. I was incredibly broke when I was building this system. Because of that, the specs of Moonshine changed regularly. It helped that at the time I was working for a small Computer reseller. I would buy parts at cost and trade up to better components whenever I could afford them. So the actual price should be higher, yet still impossible to calculate. I believe I started with 16 meg of ram, 166 MHz CPU, and no Monster 3D. It kind of grew from there to a single Monster 3D VooDoo 1, then to Dual VooDoo 2's in SLI*. This system definitely gave me the most bang for the buck.

This was my first computer to really live on the Internet. Granted at the time, all we had was dial-up. I became quite efficient at queuing up downloads that would take all night. I had a fascination with FTP in particular. This was also a time when Windows 95 didn't come bundled with a web browser. So we used Netscape most of the time. When Internet Explorer 3.0 came out, I switched to using it full time. I ran into my first video game emulators here. The most popular at the time was a Nintendo emulator called Nesticle. The games played on this system were: Quake, Mechwarrior 2, Descent II, and Diablo. A new technology also hit at this time. Hardware 3D acceleration. This was the biggest thing to hit PC gaming since the CD-ROM. The first game to really showcase it was Quake. Now that I think of it, this one game, Quake, ushered in a whole new era of gaming. Things like Windows replacing DOS for games, Internet on-line gaming, and hardware 3D were now possible. I played just about every Quake engine game made. Like: Sin, Hexen 2, Heretic II, even the awful Daikatana.

I used to haul this computer around to LAN parties. My good friends Dean and Aaron would get together at Dean's business and use his LAN to play games. We would spend entire Saturdays just playing games like Shadow Warrior, and Total Annihilation. Good Times! Something I really miss. Playing on the Net is great and all. But there is nothing like being able to look across the room and laugh at the person you just schooled in a game.

* SLI: Scan Line Interleave. A technology created by 3dfx to combine two VooDoo2 cards with a ribbon cable. Each card would render half of the screen. Thereby doubling your game performance. A side benefit was that they cards would share memory as well. This allowed you to run at higher resolutions than you could normally.

Note: My current computer Clank is a reincarnation of this system. I've tried to match the specs as closely as I could.