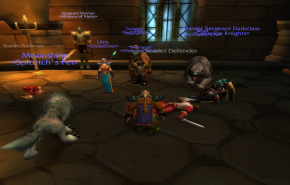 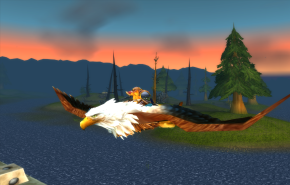 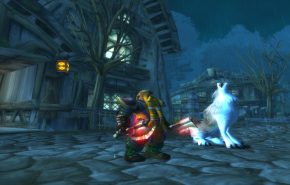 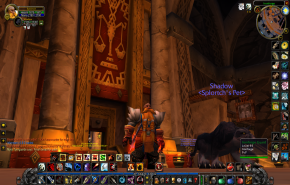 World of Warcraft is a MMORPG (Massively Multiplayer Online Role Playing Game) based in the Warcraft universe. WoW came out in Nov 2004. I didn't even begin my quest in Azeroth until August of 2006. Almost 2 years after the games original release date. I got my account through work, as we are testing WoW on Linux using our CrossOver software. I also play at home. The short version of my story is that after Ultima Online I promised my self (in a not very strong binding contract) that I would never again play a MMORPG. See my review on Ultima Online for my reasons to that respect. It only took about 5 minutes of playing to get hooked all over again. WoW is very addictive. Anyone can play this game, and to date 7 million people already do. WOW indeed. What separates this game from UItima Online is that most of the game is based around quests. In this way, it plays very similar to Diablo II. You get quests from NPCs (non-player characters). Completing the quests gives you experience. When you have achieved enough experience you attain new levels and abilities. My primary character, Splortch. Is a Dwarf Hunter. I chose the hunter class because I liked the ability to have a pet. You command your pet to attack, and then you stay at a safe distance and shoot the target. This way, your pet becomes the 'tank' and you become the DPS (damage per second) powerhouse to take the target down. Hunters are second to Mages in their ability to dish out DPS. A second part of the game is PvP (player versus player). Normally when you are questing, you are marked as non-PvP. This means you cannot be attacked by other players. You can issue a command to go into PvP mode and then you can be attacked by other players also marked. Or, you can enter Battlegrounds. These dedicated PvP areas are designed around objectives. Most play similar to CTF (capture the flag). Playing PvP earns you honor. More honor will allow you to attain higher ranks in the game. There is so much to enjoy in this game. I see myself playing for this for quite some time to come. Look for me on the Aerie Peak server if you want to drop me a line.
Newman Rating: