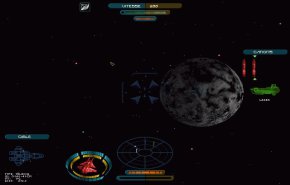 I liked the original Privateer, but something is wrong with this sequel. For one, at the time I was already through with DOS and playing games in Windows 95. Out comes this game, boom, requires DOS, and will not play in Win95 at all. Bleh! That technical fiasco, was not why I didn't like the game overall. I just could not get into the bizarro plot they were putting out. That and it was so very different from every previous WC game. Like an alternate reality. Too bad, it looked like it had so much potential. Just not for me.
Newman Rating: