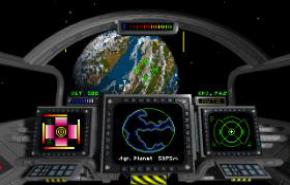 After Wing Commander II Origin decided to expand the WC universe a bit. Out of that plan came Privateer. A game that is so open-ended that even though there is a plot, when you finish it, you can continue playing. In the game, you play as a freelance pilot finding a way to survive in the harsh depths of space. You can either become a mercenary and fight your way into some credits (cash), or you can be a frieghter pilot and transport goods from planet to planet. In my case, I did a bit of both.
Newman Rating: