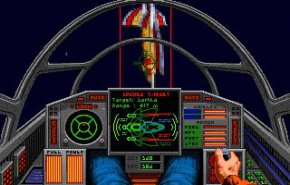 The higly anticipated sequel to Wing Commander. This is the original DOS version. I lost my floppies, but I still have a copy of it on CD. The CD is a deluxe version that contains the speech pack. I also have it in the Kilrathi Saga update. See that entry in the DB for more info. Back when this game was released, it really pushed hardware to the limits. I needed a fast CPU at the time. I remember there was some complaints about this. But, not from me. My system was up to the challenge. Origin was never afraid to push the limits.
Newman Rating: