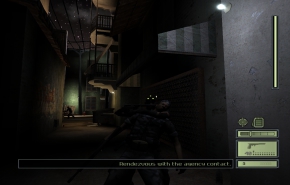 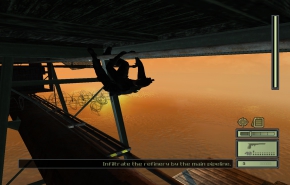 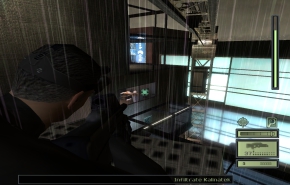 In Splinter Cell, you take on the role of Sam Fisher, an operative for the secret organization Third Echelon. I am not a fan of Tom Clancy's books. I've tried to read them, but my eyes glazed over quickly. Nor am I really into the whole Rainbox Six series of games. A bit much stratagy for me. But Splinter Cell, now we are talking. This game is all about sneaking and staying hidden. You are a lone spy attempting dangerous missions where being caught is not an option. Many missions you are not even allowed to kill a single person. You can knock them unconscious and hide the body to conceal your deed. For much of the game you only armed with a silenced pistol. You can use it to shoot out lights to cover your tracks. You can use it to kill some mercenaries, but you need to do it in a single head shot or they will mow you down with their semi automatics quickly. Eventually you get a more powerful gun. It comes with many interesting attachments. My personal favorite is the sticky shocker. I will quickly incapacitate someone with an electrical charge. This gun also has a scope to pick the bad guys off at a distance. Graphically this game is bar none. The lighting is spot on. Though a bit unrealistic, and I prefer it that way. They shadows you hide in to me look like you could be spotted easily, but enemies will walk right by you. Any darker though, and you would not be able to appreciate how good this game looks. You are provided with night vision, and heat vision googles. This will help you in rooms that you've knocked all the lights out in. Some may find this game too slow. If you only like run and gun this game is not for you. But if you like to take your time, and experiment. You will like this game as much as I do.
Newman Rating: