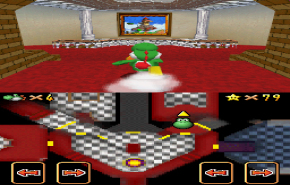 Port of the Nintendo 64 title Mario 64. Actually, this is more than just a port. It adds quite a bit of new stuff specifically for the DS. For one thing, the analog control is now on the touch screen using the DS' thumb strap. It's a bit awkward at first, but you get used it. You even learn to appreciate it a bit. I tried playing with the gamepad digital control as well. I prefer the new touch screen. Above the contol changes, this game uses the touch screen as an map of the area you are in. Also, the story is changed a bit. You start the game as Yoshi, and have to unlock the other characters Mario, Luigi, and Wario as you play through the levels. Each character has a unique set of moves. For instance, Yoshi can suck up enimies with his tounge and spit them out as projectile weapons. Nice. Also included is a set of mini games that all use the touch screen in unique ways. It appears as though you can unlock more mini games as you find hidden keys in the main quest. There is also multiplayer, but I have not had a chance to test it out yet.
Newman Rating: