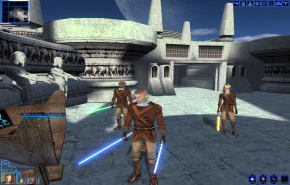 A Star Wars based RPG set many many years before the Galactic Empire and the rebellion we know so well. This entry in Star Wars has all new characters. Some places and items are very familar to us, such as the venerable light saber. I just recently beat this game. I enjoyed it from beginning to end. If you like Star Wars, and are also partial to playing RPGs, then this game is a no-brainer. Go pick it up NOW.
Newman Rating:

Cheat Codes:
In your game folder, (i.e. C:\\Program Files\\LucasArts\\SWKotOR), edit swkotor.ini and under [Game Options] add EnableCheats=1 Then when playing press \' to bring down console and enter any of these cheats below: (number) = eg. 10 up to 999