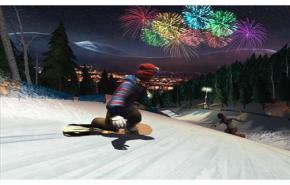 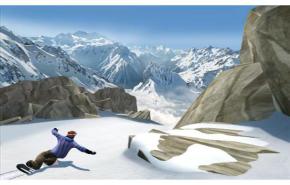 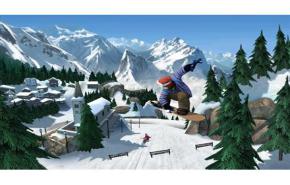 I have not played a snowboarding game since SSX: Tricky. I'm not counting the mini game in Wii Fit as it is not a full experience. In 2009, I finally got around to learning how to board in "Real Life" (TM). This renewed my interest in playing it in my video game life as well. On top of that, I have really loved using my balance board in Wii Fit. Shaun White as you may or may not know was our premier member of the US Olympic team during the 2006 games in Turin, Italy. As per usual for top tier sports star, his name appears on a video game, no big surprises here. This game was released on all 3 consoles (PS3, 360, and Wii). What is different is the Wii version is a completely different game than the other two. The Wii version features cell-shaded graphics over the more realistic rendering featured on the 360 and PS3. Add, on top of that balance board support, and you have a fun and original game. I actually prefer the more arcade style (or SSX style if you prefer) of this game. This is one of the RARE times I will buy a game on the Wii over the other two, myself being a graphics snob and all.
Newman Rating: