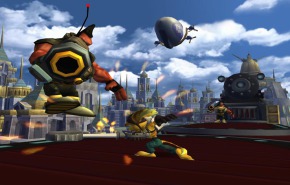 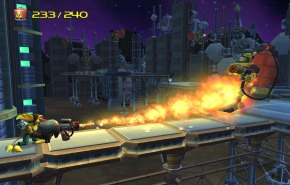 Ratchet is constructing his new vehicle when a spaceship crash-lands near his home. He reaches the wreck and discovers a small robot, whom he later calls "Clank". After watching the infobot Clank found on planet Quartu, Ratchet sets out to the planet of Novalis for more information on Drek's plans. Unfortunately, the ship inexplicably crash-lands in the Tobruk Crater. On Novalis, Ratchet and Clank rescue the Planetary Chairman, who, after some convincing, shows them an Infobot giving a hint as to the location of Captain Qwark, and lends the duo a courier ship for the journey. After several planets, Ratchet and Clank arrive in Blackwater City on planet Rilgar, where they encounter the Captain. Qwark encourages them to prove their status as heroes by running his specially-designed training course at his headquarters on the planet Umbris. Eventually reaching the end of the course, Clank falls for a trick by Qwark, causing the duo to land in the lava cavern beneath the base, the home of Qwark's Snagglebeast. Qwark reveals that he is working with Drek to stage his comeback by being the official spokesperson for Drek's new planet, before leaving the duo to fight the Snagglebeast. When Ratchet and Clank eventually defeat the Snagglebeast, they steal a Qwark ship from a nearby hangar to make for the planet Batalia. Several planets later, when Ratchet acquires an 02 Mask and is able to breathe on the toxic, once Blarg-inhabited planet Orxon, the duo capture an Infobot after a long chase. The Infobot reveals that Drek's scientists have created a superweapon called the "Planet-Buster Maximus", a giant missile designed to destroy an entire planet so that Drek's new planet can be moved into the orbit previously occupied by the planet, which Drek considers favourable. Ratchet and Clank travel to the weapons facility on the planet Hoven, where they destroy the Planet-Buster. Drek sends Captain Qwark to the Gemlik Moonbase, which is preparing for a full-force attack against the defenceless planet of Oltanis, and lends him a starfighter with which to eliminate Ratchet and Clank. Ratchet and Clank arrive on the Gemlik Moonbase and, after running the gauntlet of Blargs and robotic space fighter jets, encounter the Captain. Ratchet soon shoots down Qwark, who crash-lands on Oltanis, as Ratchet sees the devastation which Drek is causing and admits his selfishness in focusing on Qwark, before taking off in a new space fighter ship. Ratchet and Clank then continue their planetary travels until they eventually encounter the machine which produced Clank on the planet Quartu. An Infobot reveals that Drek has come up with a new way of removing the planet occupying his selected orbit, which turns out to be Ratchet's home planet, Veldin. The duo then travel to Drek's Fleet in orbit over Veldin, where they discover that Drek's new weapon, the Deplanetizer, is hovering close to Ratchet's home. Ratchet and Clank travel to Veldin and come face to face with Drek on the reflector dish, where, after a fierce multi-stage battle, Drek is presumably killed in his panic to escape, before Ratchet and Clank activate the inverted Deplanetizer and fire on Drek's new planet. After the Deplanetizer is fired asteroids from the destroyed planet come crashing down, and as Ratchet and Clank dodge an asteroid they almost fall off, but Clank is hanging on the edge while Ratchet is hanging from Clank's foot. Clank can't pull them up because his arm broke, and they fall off but as they are about to hit the ground Clank uses the thruster pack and saves Ratchet and himself. Then Ratchet says he'd fix Clank's arm and they walk away.After the credits roll there is a movie with Steve McQwark (Captain Qwark)using his new gadget the personal hygienator.
Newman Rating: