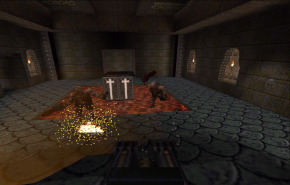 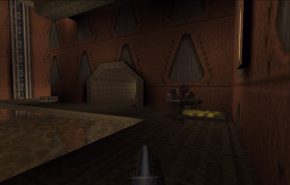 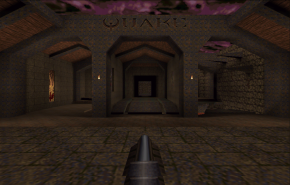 Released in 1996, 3 years after the phenomenally successful DOOM. Quake was the worlds first fully 3D first person shooter. Everything from the levels to the enemies was rendered in 3 dimensions. Originally Quake was released as a DOS game. Later on, a Windows executable was released. When the original 3dfx VooDoo 1 was released, we also go the chance to play Quake 1 with hardware accelerated graphics. I was completely blown away by the power of this game engine. I remember hanging out late one night at my job chatting on an IRC chat room waiting eagerly for the shareware episode to be released onto the id software ftp site. Upon release it was like a shot heard around the Internet. Every PC gamer jumped into this game and ate up every tasty morsel. What helped this was Quakes ability to play online. Back then all we had was 56K modems, so playing online was difficult. When it worked, it worked well. All this talk about the Quake engine, but not much talk about the game itself. The story was nonexistent. Something to do with "slip gates" that transported you to a medieval world. The world of Quake was bizarre. It was a strange mish-mash of dark ages swords and sorcery with near future guns and technology. It did not make a lick of sense. In the end, it did not matter. Quake still ended up being a grand time.
Newman Rating:

Hit \"~\" to bring do the in-game console. Then enter one of the following codes:

Quake did not have the ability to set game settings in game. You need to modify your Windows shortcut with one of the following comand lines.