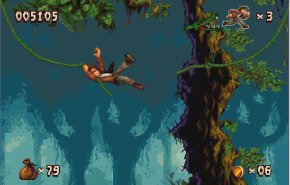 I picked this game up in my early craze of getting anything made for Windows 95. I was thrilled to see anything ported to DirectDraw. It seems like an off decision to make now. I found this game a tad difficult for my tastes. I never made it very far into the game. I never really got into action games on the PC. Maybe it's becuase nobody made a descent controller. I think they would have been better off not adding all the weapons and just stayed with the running and jumping puzzles of the original 2600 games. I found the boss battles out of place in this game as well. I wanted to explore, but this ended up just being an itch and twitch action game.
Newman Rating: