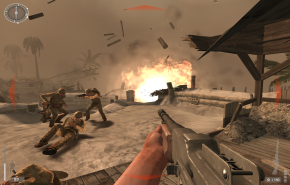 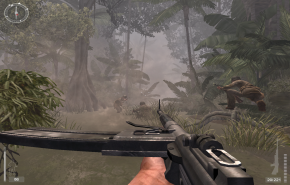 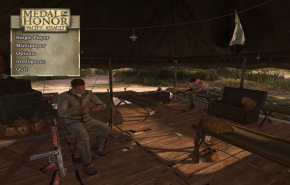 Sequel to the smash PC hit Medal of Honor: Allied Assault. This is yet another entry in the very large (and at this time still growing) library of WWII single player FPS games. After MOH:AA most of the team left to form a new studio. That studio went on to make the excellent game Call of Duty. This game in the MOH series was made by a new team. It shows. I wouldn't call this a bad game per se. But, it did not draw me into it's story as much as Allied Assault. Based on the title you can tell that this game focuses on the Pacific theater. You spend you time taking on the Japenese army. On nit pick that bugged me was the AI. Many of the enemies will simply charge you and try to skewer you with their rifle bayonets. This gets old fairly fast. I doubt that, that many of the army of the rising sun would be so suicidal. Also, during the opening level at the Pearl Harbor attack, what you do does not really affect anything. You just spend most of the level on a turret trying to shot down Zeros. A funny thing about this games depiction of Pearl Harbor is that it shows literally hundereds of planes in the sky at once. A WWII buff friend of mine pointed out there were not nearly that many planes in the sky. A lot, but not like the game shows. Let's try to be more accuate here people. Graphically, this game is a showcase. The rendered jungles of the Pacific rim are very well done. The 5.1 surround sound is very top notch as well. Once again, it seems polish was not enough on its own to make this game fun. I should note, that I bought the DVD directors edition. I have a complaint about that. The game installs the video files onto your hard drive. WHY??? You need the dang DVD in to play the game. Seems like a waste of HDD to me.
Newman Rating: