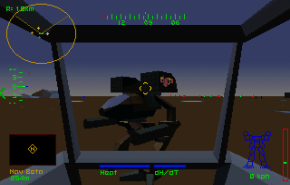 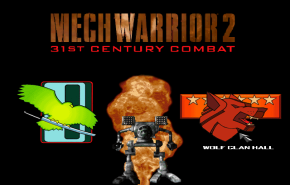 This is the DOS version. I am a sucker for giant mech games. There is something inherantly slick about being in a bipedal tank armed to the gills with massive destructive power. Mechwarrior is the crown jewel of this genre. From what I remember, this game was long delayed and considered vaporware. Aparently Activision was having diffuculty getting this out the door. I think that kind of mismanagement is what lead the eventual loss of the FASA license. I also own the 3Dfx version, and the Titanium Edition of this game. At one time I had the Windows 95 version too, but I have no idea where the CD dissapeared too. I have been playing this again recently under DOSbox. I still like this style of gameplay. I'd like to see a return to it with decent multiplayer support on the PC. The later versions by Microsoft just never seemed to have the magic. I think they toned them down to much. This game is much more of a Sim than an action game. There are a ton of contols you need to master. The ability to rotate the torso of the mech to shoot while moving in another direction does take a bit to master. This game was the whole reason we have flight sticks that twist (like the Microsoft Sidewinder), to hand the torso movement.
Newman Rating: