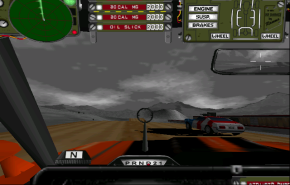 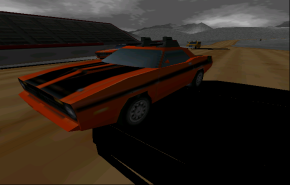 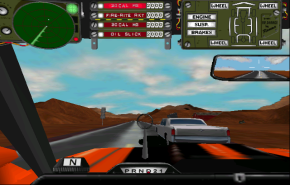 Set in an alternate version of 1976 where car vigilantes roamed the southwest. You play as Groove Champion who inherits a car and a hero legacy from his sister. Groove sets out to find out who killed his sister and maybe help solve some of the worlds problems. I76 runs on an improved version of the engine from MechWarrior 2. I own the Arsenal pack which includes the Gold version of I76 and the Nitro Pack Add-On. The Gold version adds support for hardware accelerators such as the 3Dfx VooDoo 2. The game is locked at 640x480 so it is farily low-res. Direct3D graphics improve it somewhat. What matters in this game is the game play. Car physics while not realistic are exciting and handle well. It is a challenge to line up your shots as you are circling through the desert against your opponent. As you progress through the game you ear upgrades by picking up salvage from your fallen foes. In between missions you can tweak your cars armor and mount variuos weapons and upgrades to your vehicle. I76 has an interesting art style that is carried through the entire game. The cinematics while not in engine, are designed to look like they are. The models used for cut scenes are low polygon and look primative. Somehow, they work very well. The music is all very 70's and groovy.
Newman Rating: