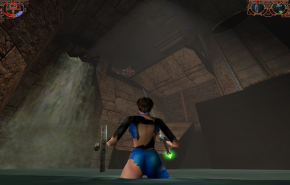 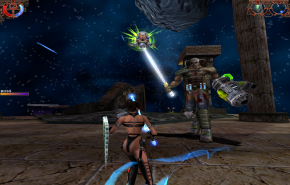 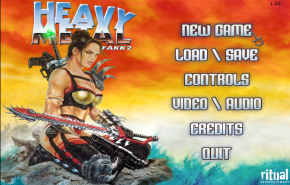 This is the continuation of a story started in a classic animated movie of the same name. As of this writing, I have yet to see the movie. I may check it out sometime. You play Julie, a God killer who saved the world in the movie. In FAKK2 the survivors fled to a new planet where they discovered the water granted eternal life. Everyone was living in peace. That is... until a new evil God, who wants the secrets of this planet for his own, comes to ruin your day. It is up to Julie once again to save everyone. Playing from a 3rd person style view, you control Julie. The controls are similar to a 1st person shooter. Though, this game uses both ranged and melee weapons. I really like the sword and shield combo combat. You can block with one mouse button, attack with the other. All while circle strafing your target. The control mechanics work very well. Though, when you want to duck, Julie has to un-equip her selected weapons. Speaking of weapons there is no shortage there. You have evertthing from you basic sword, to a slingshot, crossbow, then up to pistols, shotguns, rocket launchers, and high explosives. Later in the game you aquire the awesome chainsaw sword. Though, it eats through gas very quickly. The plot is very straighforward, no surprises. Though, the ending sets us up for a sequel. I'm not sure there is even going to be one. Kind of a dissapointment. There are some odd moments in the game. Some seem out of place. It is almost as if they are not sure of the style they want the game to follow. For example, there was a swamp sequence that featured a Lord of the Rings style (a.k.a. Treebeard) walking tree that helps you out. Julie is a hottie. The game wastes no effort to prove that point. Julie starts out in a futuristic running-man style outfit. Throughout the game, she gets new outfit "upgrades", ending with a sweet black leather thong. Yowsers. :-D This was an interesting gaming experience. Worth playing overall.
Newman Rating: