Drakan: Order of the Flame 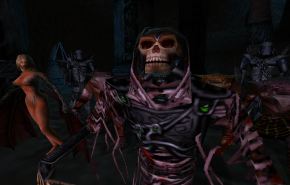 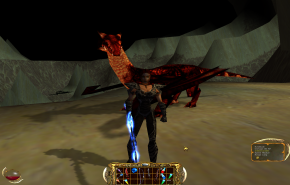 Drakan was released in 2000 during a period where I was still let down by the disappointing Ultima IX. Enter a game that UIX should have been all along. You play as Rynn, a peasant girl who's brother is taken, and who's village is destroyed by an ancient evil. Right off the bat you are told of the Order of the Flame, a now extinct group who protected the world with the help of dragons. You search out and then bind your soul to the dragon Arokh. The game basically plays in two parts. One on foot, were you play as Rynn. This plays much like any other 3rd person RPG. The other part is in the air via Arokh. You fight other dragons, and even take out targets on the ground. Your soul is bound to the dragon. So if he dies so do you. I enjoyed this game from beginning to end. I couldn't really put it down. It's still a great game and if you can find a copy, I wholeheartedly recommend this game. It's too bad that the sequel was made for PS2 only. I would have much rather played it on the PC. There was a multiplayer game included as well. You could take on other players via dragons. I never really cared for that part of the game.
Newman Rating: