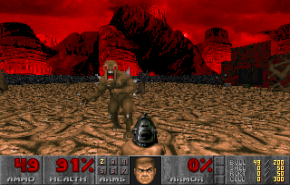 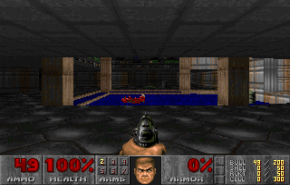 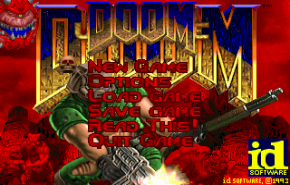 Set in the future, you play as a UAC space marine stationed on the Mars moon base on Phobos. The scientists there were doing experiments with teloportation when "something went horribly wrong". Daemons from a Hell like dimension starting pouring into the base. Everyone else is dead. As the long survivor you need to battle through the base and into the depths of Hell itself to save all life. After the smash hit Wolfenstein 3D, id software decided to make the next best first person shooter. While Wolf3D had flat levels and 90 degree angle only walls, DOOM's new engine could render levels with stairs, and different heights and walls at any angle. It was a sight to behold compared to Wolf3D. Even at the now primitive resolution of 320x200 DOOM had great visuals. I remember downloading DOOM from the local BBS at 14.4K baud modem speed. The download took hours, but it was worth it. My 486sx 20 at the time was just enough power to play the game at full speed. Don't let me forget to mention the sound. DOOM has great and now unforgettable sound effects and music. You could hear Daemons roaring rooms away. The heavy metal (via FM synthesis) sound track is pulse pounding even to this day. Originally a DOS game, DOOM has since been ported to nearly every platform capable of playing games. Since the game was open sourced by id software, you can now play the game on devices never meant to even play games, such as Cameras.
Newman Rating: