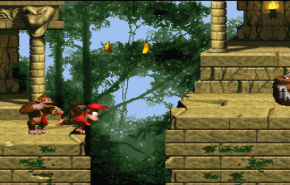 After a long hiatus we return to the country of Donkey Kong. No longer is he pestered by a certain Italian plumber. He now has his own problems to deal with. Namely, his entire banana horde has been snatched away while he slumbered in his comfy tree house. For the SNES, this is as good as graphics got. Rare did a fantastic job using 3D pre-rendered frames for the animation. This gives the game a cool almost claymation look to it. The use of lighting in all the levels is also very well done. Things have remarkable depth for a 2D side scroller. What sets this game apart is the fact that you control not one, but two characters in this game. Introducing Diddy Kong. After you rescue Diddy from his barrel prision, he will follow you around. You can toggle back and forth between Donken and Diddy at any time. Though, there really isn't any difference between how they control. It basically allows you one extra hit. If you get hit, Donkey or Diddy will run away and you are left with just the one remaining. Reminds me a bit of Tails in Sonic the Hedgehog 2. This game has been ported to the Gameboy Advance, but I think the graphics in that version lost a bit being shrunk down to the small screen.
Newman Rating: