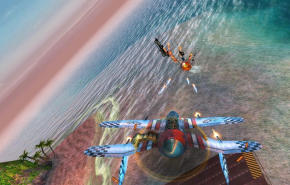 Sequel to the PC game. Microsoft pretty much killed off 99% of its PC game development and moved everything to the Xbox. I think I would have rather seen this game as a action simulation like the 1st, but what can you do? Now the game is a 3rd person action title that only preserves the style and story of the first. I know the first didn't have the most accurate flight model being an action game. This one has even less. Complaints about platform support aside. This is still a good title. The Xbox controller works well here and the planes perform as you'd expect for a console title. Maybe a bit better than expected. The style is what really captured my interest of the first game. The planes are just plain (no pun intended) slick. Out of some alternate 1940's reality with some hot rod trimmings. I seriously doubt any of these contraptions would actually be flight worthy. The game now uses a hub system, similar to Grand Theft Auto. There is a central "city" where you can pick missions from. This allows you to pass over some tough missions and attempt them later. I have always been a big fan of this style system. Nothing ruins a game more than hitting a point where you just can't make it past a level. At the very least, this system allows you to delay that and take some easier missions until you build up the skill to take on the tougher ones. I have yet to try the Xbox Live online support. I will eventually I think. I'm more of a single person player. If I do play multiplayer, I'd rather have the opposition sitting in the same room with me. More review pending as I collect my thoughts and play this one further into the game.
Newman Rating: