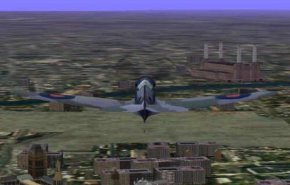 Flight simuations have always been a on and off again love interest for me. Occasionally I get bit by the flight bug and want to hop into the nearest cockpit. This ga0me seemed like a logical choice for me. It took the engine from MS award winning Flight Simulator and added the ability to fly and fight in a WWII European theater. If you play a flight sim, you need a good flight stick. It adds the experience. I was partial to my Microsoft SideWinder 3D back when I first played this game. The twist feature of that stick worked well as rudder control. I was never so into sims I would get the foot pedal controls. I'm just not going to get into the quality of the flight model. I have nothing to base that on having never really flown a plane. It seemed fine to me. Granted, I tend to tone down the realism settings so the game is fun to play.
Newman Rating: