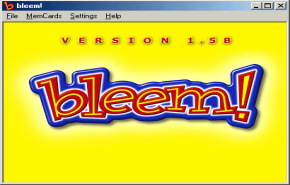 Playstation 1 emulator for the PC. Works fairly well, but the company has gone out of business, and it is no longer updated. There are much better Emulators out now any way. I personally like ePSXe at the time of this writing. Bleem was launched in 1991, and disapeared at around 2001. Sony tried to sue the Bleem authors but was unsuccessful. But the huge costs of maintaining the court battle still killed Bleem off in the long run. Overall the emu worked fine for many of the games I tested on it. But, since it lacked any real hardware 3D acceration like ePSXe, I don't use it anymore.
Newman Rating: