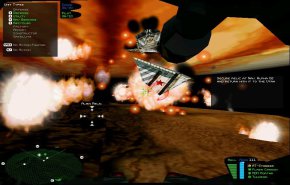 A bizzare "remake" of the original Battle Zone arcade game. OK, not really a remake, but capitalizing the name. You pilot a hover tank on the surface of the moon to battle the Russians for resources only mined in space. The game adds some Real Time Statagy elements and resource management to take itself beyond it's predecessors point and shot motif. You can even leave yout tank and battle on foot, or jump into a different vehicle. It was entertaining for a few levels, but I grew board of it. I found the LAN play much more enjoyable. Some of the weapons such as the shockwave cannon are fun to see in action.
Newman Rating: