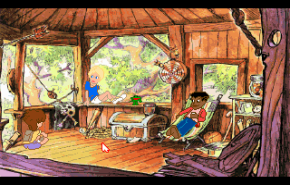 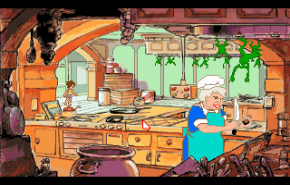 The Adventures Willy Beamish. You play as the title character as he tries to find his way to the Nintari championships. Along the way you win a frog jump contest, meet a family of Ninjas, and foil the plans of an evil Cruela Devil wantabe and her plumber lacky. Sierra/Dynamix had such high hopes for this game but I don't think they panned out as much as they had hoped. I did enjoy this game, even if it was a tad on the easy side. The hardest puzzles of this game mainly came down to timing. Still, I appreciated the art style used. It reminds me of old saturday morning cartoons. There is plenty of "What the ?!" moments in the game. At first things seems grounded in reality, but then sometimes the game takes you on a strange left turn down Wierd Ave. Overall, its an average adventure game that I think is unique enough to be played through.
Newman Rating: